Innoshima to the world. How Manda Koso was created.

“I want expectant mothers to eat Manda Koso so they can have healthy babies.”
– The beginning of Manda Koso
Shingoro Matsuura, the founder of Manda Fermentation, was born as the 11th family head of a sake brewer, Manda, which has continued for generations since the Genroku era. In his youth, Shingoro was filled with the spirit of inquiry every day. He became intrigued with living creatures and his interest eventually changed to a passion for ecology.
When he was graduating from high school, he started to aspire to unlock the natural wonders to contribute to people and the earth’s environment. He then began learning about breeding at an agricultural experiment facility in Shizuoka. One day, he learned that the quality of breeds is influenced by the genetic information from parents and the environment of upbringing. His inherent sense of inquiry was sparked when he thought, “By laying out the environment of upbringing, I can cultivate ideal breeds more effectively. Is there a way to use the power of enzymes to increase the effect?” With the goal of thoroughly unraveling the secret of enzymes, he advanced to the Tokyo University of Agriculture in the spring when he was 20 years old. Although he was enrolled in the faculty of landscape gardening, he devoted himself exclusively to the studies of breeding and fermentation.

365 days of following his passion for fermentation.

After his father collapsed from an illness and returned home to Innoshima, his passion for fermentation did not extinguish. He set up a lab in an old sake brewery and shut himself in the lab from morning to night. When he married his wife, Naoko, at the age of 26, his passion for fermentation remained unabated. An enzyme is a living substance that is easily influenced by its environment. It is extremely difficult to control, and it requires a great deal of effort to start fermentation. Through multiple failures, he became so preoccupied that he thought about killing himself.
A long time passed, and he successfully developed a fermented food, which is the origin of Manda Koso. It was around the same time when his wife became pregnant.
Shingoro, who had strong confidence in Manda Koso, after feeding it to livestock and proving its safety by consuming it himself, asked Naoko to eat a trial product, despite the opposition of people around him. He wanted expectant mothers to eat it so that they could give birth to a healthy baby. Naoko had a healthy pregnancy and had an easy delivery of a healthy baby. The reputations of Manda Koso spread like a bush fire, increasing the number of customers.

The fruit of technique and passion born from a 23-year research project.

In 1984, he successfully bottled the product, which was sold by measure in the beginning. This was the completion of the genuine Manda Koso. At that time, he was 41 years old. He had devoted 23 years to the research. Even so, he experienced a series of struggles before his business got completely on track. He embarked on his business on his own in Tokyo and went around selling Manda Koso even though he barely made a living.
Many years passed and after building a large factory on the island of Innoshima, his fundamental belief remains unchanged even now. “I want to make the nature’s gifts useful to the people and nature.” His passion traveled across the sea and today, people of more than 30 countries around the world use Manda Koso regularly. 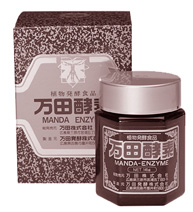